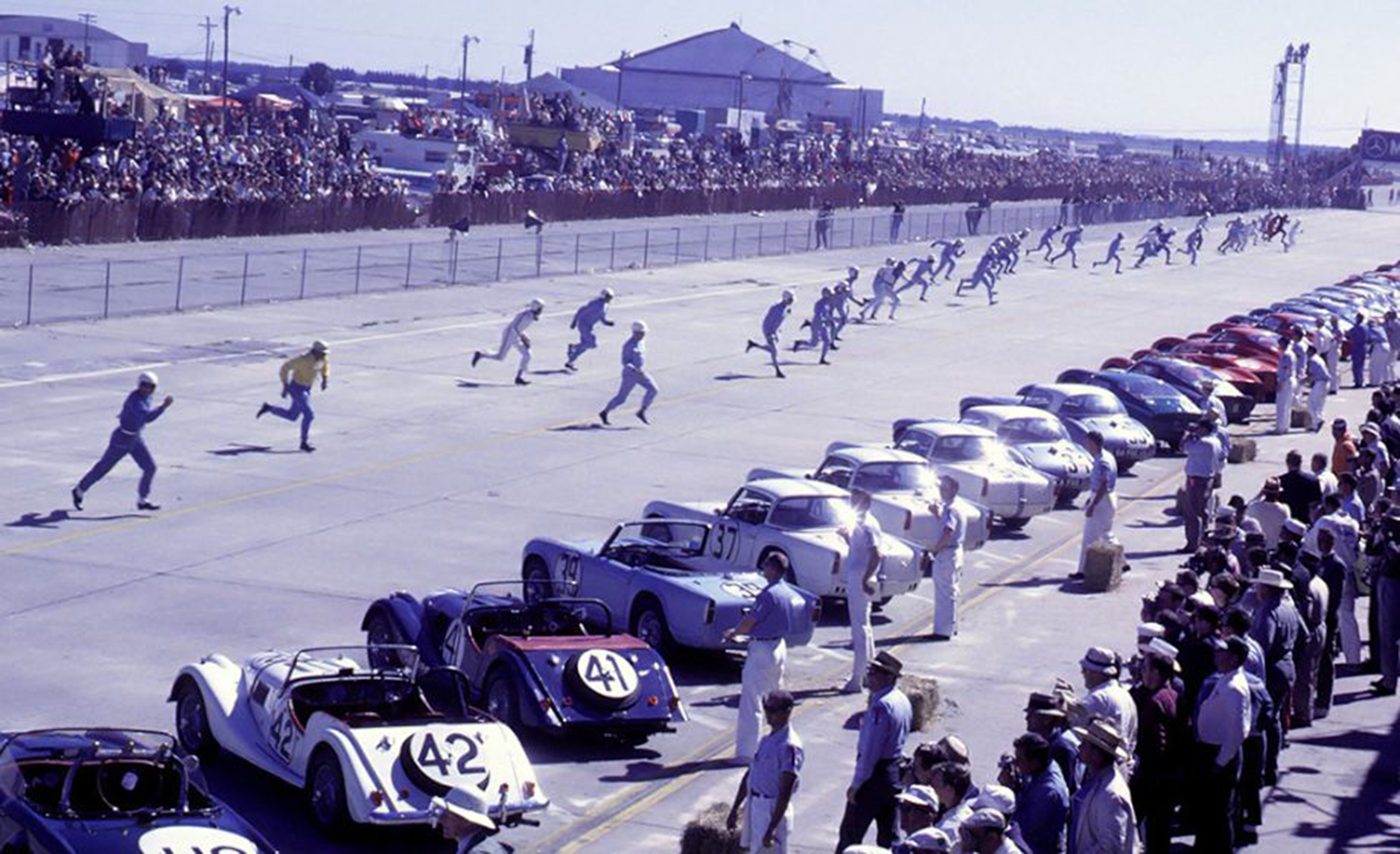 History in the USA
1963 Sebring 12-Hour Grand Prix of Endurance In the Le Mans start at Sebring 1963 some of the drivers broke on the count of “two.” Photograph by Tom Bigelow.
Click here to see more photos and to read Louis Galanos' fascinating article about the race on the Sports Car Digest web site. Morgan photos feature on page 7 of the article. If you enjoy Louis Galanos' article please leave him a comment at the bottom of the page. He has been really helpful in providing this material.

Racing Iron Man George Waltman in the 1968 Daytona 24-Hour Endurance Race
A recent obituary, written by Louis Galanos, to this remarkable man was stumbled upon by a UK Morgan racer and it is amazing that so little seems to be known about him before now. The Autoweek obituary starts like this: "In 1968, Waltman completed the 24 Hours of Daytona by himself - no co-drivers, no pit crew. His Aztec Racing Morgan Plus 4 finished 30th, 335 laps behind the winner. During mandatory rest periods, bathroom breaks and meals, he would park his Morgan in the pits and place an “Out To Lunch” sign on the seat. To get additional seat time, he drove his Morgan to and from Daytona, a 2,000-mile round trip."
To read the full obituary and to learn more about George Waltman click on the links below.

Images reproduced with the kind permission of  ISC Images & Archives/DIS 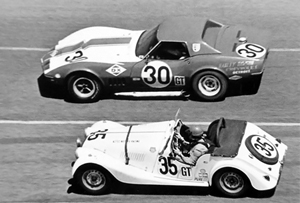 Tony De Lorenzo and Jerry Thompson finished 27th in the #30 Corvette. They are passing George Waltman in his Morgan Plus 4 on the NASCAR high-banks. De Lorenzo and Thompson each had the benefit of a relief driver plus a pit crew while Waltman did it all himself and still managed to finish 30th overall. 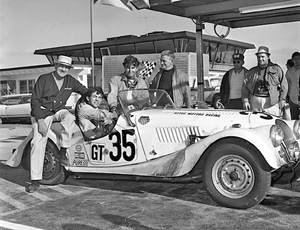 George Waltman (third from left) is congratulated by an admiring public after his solo drive in the 1968 24-Hours of Daytona. 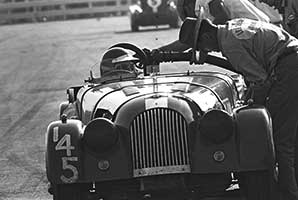 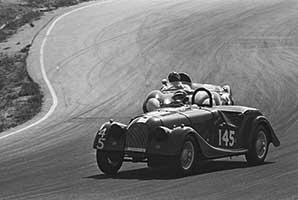 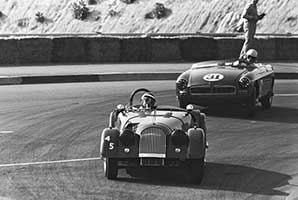 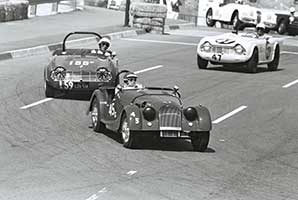 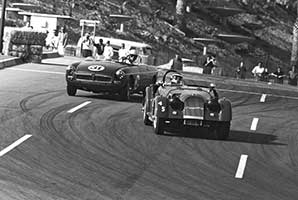 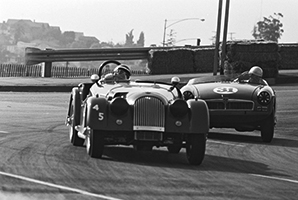 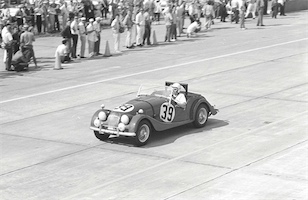 Coming down the front straight. 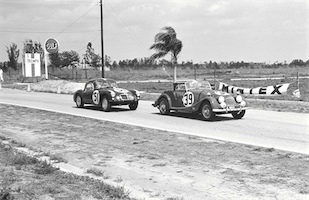 Going through the Webster Turns.  The Morgan is leading the MG A of Jim Parkinson and Jack Flaherty. 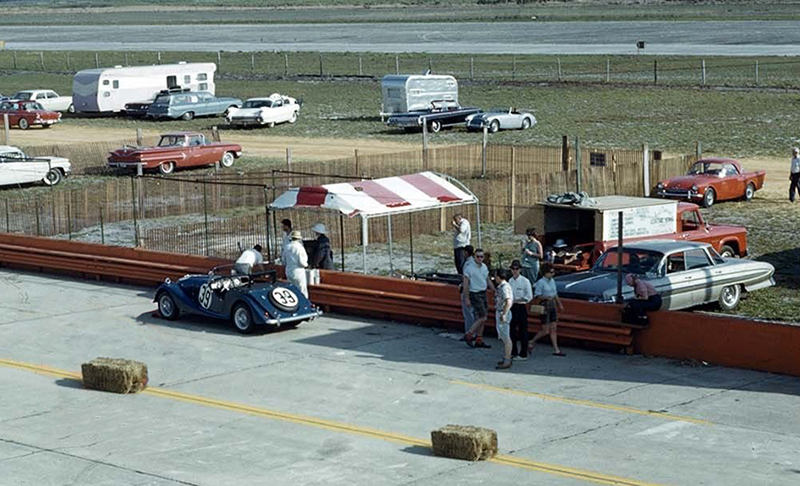 Photo kindly sent by Louis Galanos showing the number 39 Morgan Plus 4 Super Sport of Alton Rodgers and James Bailey in the pits in the days prior to the 1962 Sebring 12 hour race.  They finished in 35th position.

Kas Kastner
Kas very kindly agreed to my using some of his photographs on our web site, they are of great historical interest, especially the close rivalry between the TR and the Morgan.
Link to Kas Kastner's web site gallery 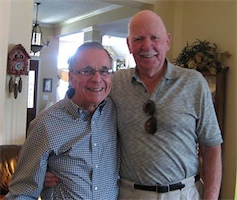 Here is a photo posted on Kas Kastner's Facebook page together with his comment: "Here we have a photo of my best friend and arch rival in road racing, Lew Spencer, the famous Morgan driver. For those who do not recognize us now, Lew is the short guy. This photo was taken in May 2014, the day before the Kastner Cup event in Texas at Lew's home in Frisco. I raced against Lew, then built engines for him, we raced sailboats together, crewed for each other, and been pals for over 50 years. Lew went on after the Morgan days to be one of the first drivers in the Cobras for the Shelby Team." 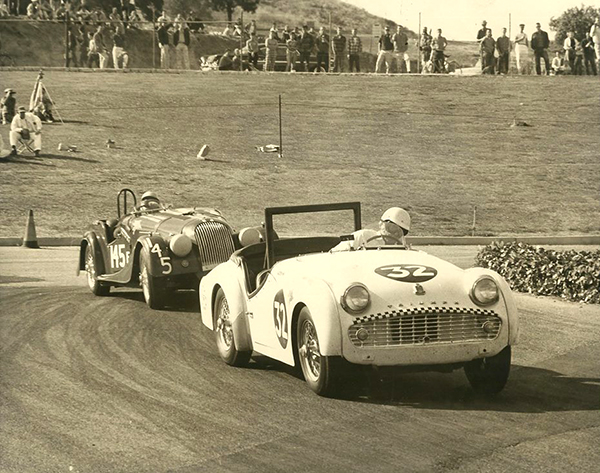 Kas Kastner's comment on this photograph: "This shot is of me is racing against my great and best friend Lew Spencer in his fast Morgan. This is the day we were racing so hard we did not see the chequered flag and raced hard on the cool off lap. Meantime Ronnie Bucknum in his 356 Porsche was sitting at the starter stand having won the race and we did not know or acknowledge it was over until we came to the line the second time side by side." 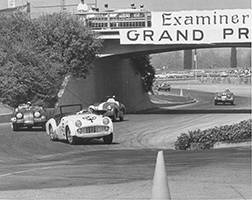 Some very interesting photographs and articles about this era can be found on this gallery.
If you search for Lew Spencer and/or Morgan you will find just one photo of Lew Spencer but the other photos and information makes fascinating and amusing reading.