1952 Eight Clubs race meeting Silverstone, some great cars including a Morgan Series One.

In 2015 it celebrated its 30th year and there was a distinct party feel in the paddock at Brands Hatch on 31st August when the Morgan Sports Car Club ran its annual race meeting. This event was the focal point for the anniversary celebrations. Some of those who took part in the first ever race at Snetterton are still competing in the Challenge and were on the grid at Brands Hatch. They include John Milbank, Jack Bellinger, Barry Sumner, Leigh Sebba and Mary Lindsay.

The Class of 1985
The photograph above was taken at Brands Hatch and those taking part were: Left to right: Grahame Bryant, Andy Garlick, Peter Garland, Andy Downes (series co-founder), Jim Deacon, Norman Stechman, Jack Bellinger, Richard Casswell, Barry Sumner, Leigh Sebba, Steve Spencer (original handicapper for the Challenge), Barry Iles, John Milbank (driver and series sponsor in 1985), Rick Bourne (series co-founder), Dave Freeman, Mary Lindsay and Caroline Tarry. The cars in the photo competed in the first ever round of the Challenge in 1985. Everyone took part in the series from the very start and of those who were on the grid in the first ever round of the Challenge six were racing at Brands Hatch on Monday: Grahame Bryant, Jack Bellinger, Barry Sumner, Leigh Sebba, John Milbank and Mary Lindsay.

The people behind the creation of the series
Andy Downes has kindly provided a background to the birth of the race series as we now know it. Andy was a founding member and has always been a staunch supporter of the series. He has supported Morgan racing since the early 1970s in a variety of roles: Team Manager for countless Morgan 6 hour relay teams and 24-hour race Morgan teams in the Willhire and Britcar events. Andy has also been Secretary of the Technical Committee and Club Steward.

Click here to read Andy's account of how it all began. The early years - how Morgans came to race together as a marque in 1966
The first Morgan Race was at Bentley Drivers' Club Silverstone in 1966. It was the influence of Harry Rose that led to the BDC hosting their first Morgan race. He was a well-known member of the BDC who restored and raced vintage Team Blower Bentleys, he also made “Specials” on the post war Bentley chassis.

Luckily for us, Harry Rose also owned a Morgan and he had obviously decided that it would be a good thing to have a Morgan race at BDC Silverstone. The race was a 5-lap handicap for members of the Morgan 4/4 Club (as the MSCC was then known). There were 16 starters, an impressive Morgan grid even by today’s standards. Entrants included Peter Morgan and Ray Meredith and Harvey Postlethwaite (better known for his later association with design in F1).

A report of the race in the BDC Review for 1966 said: “This was won in fine style by McKechnie’s 4/4 Ford from the scratch mark, who overtook Bridgland and Tucker on the last lap. It was good to see Harry Rose in action looking very relaxed and keeping himself out of mischief. He said afterwards he always enjoyed a few laps in the Morgan; after the Bentley it felt like a b….y Rolls Royce! Race average was 75.77 mph with fastest lap by the winner at 75.44 mph (1 min 13.8 secs).”

Harry Rose was a member of the BDC from 1957 until his death in 1970; his daughter Ann Shoosmith continued to race his cars although she has also since died.
Click on the dates to see the entry lists and results for Morgan races at Bentley Drivers' Club Silverstone and reports in the BDC Review
1966
1967
1968

The Archivist for the BDC says that Morgans featured in the 1959 Silverstone event on August 1st. This was an event organized jointly by the BDC and Jaguar Drivers Clubs. Race 8 was a 10 lap scratch race for MGA, Morgan, TR2 & 3 and Austin Healey cars. The only Morgan entered was a Plus 4 driven by F.C. Lockwood. The winner was P.D. Leuch in a TR2 at 62.69m.p.h.

. Morgans at Castle Combe
Morgans have a long association with Castle Combe and Peter Stowe, Archivist & Historian to Castle Combe Circuit, has kindly written an article about Morgan racing at the circuit. Click here to read the article. More historical material will be added as and when available. 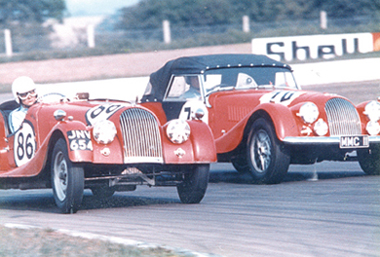 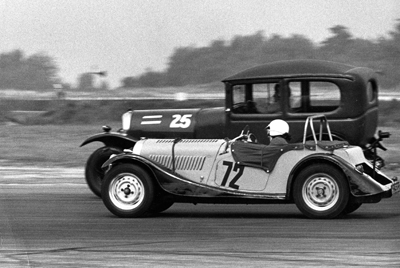 1973 Bentley Drivers' Club. Mary Lindsay's 1937 Series One is dwarfed by a Bentley saloon in a handicap race. 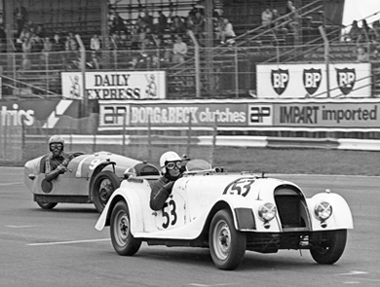 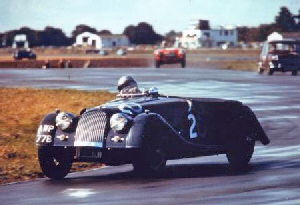